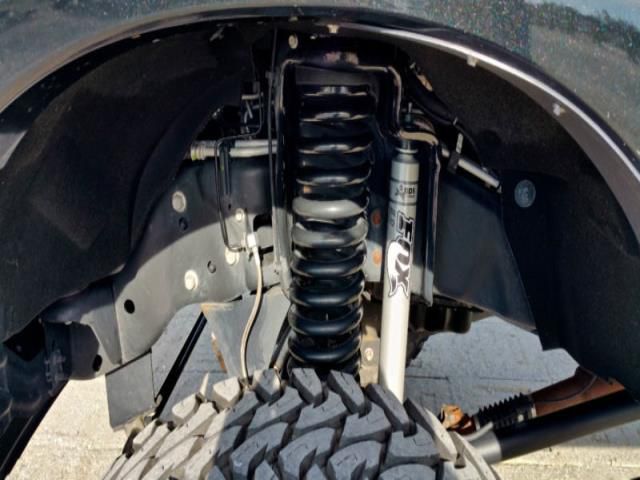 Here we have a 2014 Ford F-450 Platinum Dually 4x4 Automatic. The truck has black exterior with black leather interior. The truck is nearly brand new with under 12,000 miles. The Truck has been modified with the best parts available and no expense was spared with the build. The build commenced at about 10,000 miles. All of the modified parts have a little over 1500 miles on them. This truck was built to show at SEMA. The Truck has had the best parts fitted. The Truck carries the Manufactures warranty and does have all the goodies that a stock platinum F-450 comes with. It has the back up camera. It has the platinum black interior with a sunroof and rear sliding window as well. The truck is also equipped with a remote starter. The truck is fully loaded with every option from the factory including the 5th wheel prep package and tow package. The truck is fully deleted with no DPF fluid required. All of the emissions equipment has been removed and has since been discarded. The trucks fuel mileage has increased significantly to 16mpg in the city and over 19.5mpg on the highway. It has been tuned and is on the middle tune setting which nets the best fuel mileage. All LED light bars are controlled with the 4 up fitter switches alone with the Train horn hooked up to the up fitter as well. The truck has been dealer maintained with all Dealer services up to date. The truck rides really well and is my daily driver. Only reason why I am selling is that I have a 2016 Denali HD project that I am starting. I will share the list of modifications that the trucks has below. The truck is located in White Rock, British Columbia ,Canada. I will deliver up to Blaine, Washington. The price is in $79,500 US FUNDS. I will assist in shipping at the buyers expense.