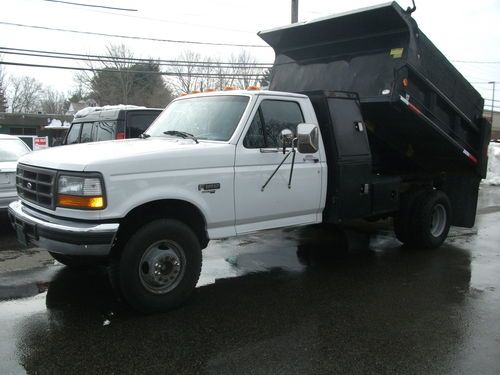 UP FOR SALE IS A VERY,VERY CLEAN 1997 FORD SUPERDUTY F450 2 WHEEL DRIVE DUMP TRUCK.THE WHITE FACTORY EXTERIOR IS IN GREAT SHAPE WITH NO RUST EVER.THE BLUE VINYL INTERIOR IS ALSO IN GREAT SHAPE WITH ONLY A MINOR CRACK OR TWO .THE 7.3 LITER POWERSTROKE ENGINE RUNS STRONG WITH NO LEAKS OR ISSUES.THE 5 SPEED MANUAL TRANSMISSION SHIFTS SMOOTHLY THROUGH THE GEARS,ALSO WITH NO LEAKS OR ISSUES,CLUCH GRABS NICE AS IT SHOULD.4 REAR TIRES ARE BRAND NEW,FRONTS ARE 90%.DUMP BODY IS NICE AND SOLID AND GOES UP AND DOWN AS IT SHOULD.THE TOOL BOXES ARE ALSO NICE AND SOLID BUT I DO NOT HAVE A KEY FOR THEM(EASILY MADE BY A LOCKSMITH IF NEEDED)THIS TRUCK HAS A VERY GOOD CLEAN UNDERCARRIAGE ALSO.TRUCK IS EQUIPT WITH AC.TO SEE AND DRIVE IT IN THE BROCKTON MASS AREA,OR FOR FURTHER QUESTIONS JUST GIVE ME A CALL AT 508-559-9795 THANKS JON.