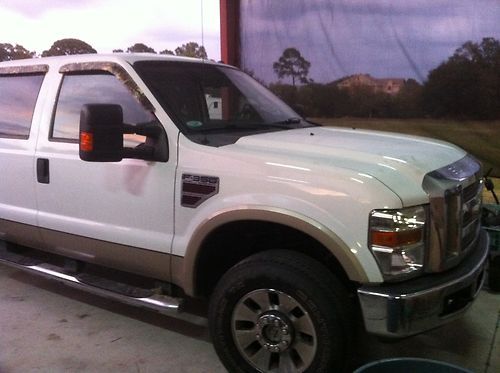 2008 F-350 4X4 longbed, excellent condition Lariat package all powerseats, windows, everything. Factory tow package, has only towed an airboat, NEVER had a fifth wheel mounted in it. White with gold trim, extra wide steps. Tail gate has built in step. Sprayin Line-x bedliner, backup camera. All leather inside, none smoker, no pets, interior is perfect. Diesel only has 57,200 miles on it. tires still have 50% tread left on them. Has never had a chip in it or been lifted, completely stock. Has always had the extra nice rubber floor matts front and rear. Front seat has center fold down console.
This truck has never been in an accident.
Toolbox is not included with the truck.