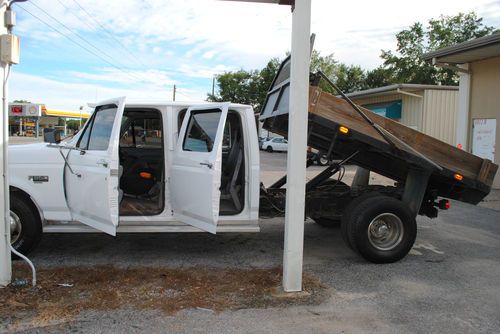 Condition: UsedA vehicle is considered used if it has been registered and issued a title. Used vehicles have had at least one previous owner. The condition of the exterior, interior and engine can vary depending on the vehicle's history. See the seller's listing for full details and description of any imperfections.Seller Notes:"The truck is in great running condition and very reliable. It currently has only 146,000 miles on it. Clean engine, strong dump bed with twin cylinders and push button to raise and lower. 9' long x 7' wide steel bed. Bed is in great shape. Tires still have alot of life on them approx 50%. A/C is new and very cold. Carpet has some coffee stains. New white paint job. I have always had seat covers on so the seats are still in good shape."

This truck is very solid. It only has 146,000 miles on it. It is the 7.3 Turbo Diesel and has been driven with care. I have added a 9' long by 7' wide dump bed to it. It is controlled by twin cylinders that can lift 22,000lbs. This is obviously overkill because the truck can only handle around 2,500lbs of extra weight and I strongly advise not putting much more than that. Dump is contralled by a push button controller inside the cab and dumps higher than what is shown in the picture. There is a tarping system to cover loads aswell. Tires are approx. 50% used. I just had the A/C redone and it blows nice and cold. Brakes are in good condition. Starter is 1 year old. Batteries are 1.5yrs old approx. I also just had a new white paint job put on it. I have taken good care of this truck as it has been good to me. If you know how to treat a diesel, it will run forever. This truck does not blow black smoke very easily which is a sign that I did not rag on it. The only reason that I am getting rid of this truck is because I am transfering to a box truck. This will make a great farm truck for someone. The truck is located in Panama City, FL. You may email me any questions you have to (naturescapespc@hotmail.com). Please read the description first fully and then ask me any question. This is a great truck and I want you to feel comfortable so ask questions and I will respond asap. Upon completion of the auction, a $500 deposit through paypal within 24 hrs.