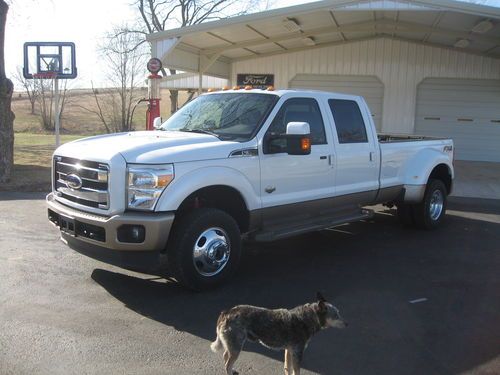 2012 Ford F350 King Ranch , this truck has 6k actual miles , i bought this through an insurance deal when it had only 1702 actual miles , the truck was very lite hit in the front right corner an truck had no frame damage ! the truck was repaired back with all oem ford parts !  it will come with an Okla rebuilt title , this truck runs an drives like new , not one thing you can fault on this truck !! it has a 6.7 litre diesel engine , it has the king ranch package , it has the built in fifth wheel an goose neck hitches from factory ford , it has heated an air conditioned seats , navigation , sunroof , actually this truck has every option ford puts on them ! back up camera , step in the tail gate , first class truck ! for more you can reach me on my cell 580-618-2020