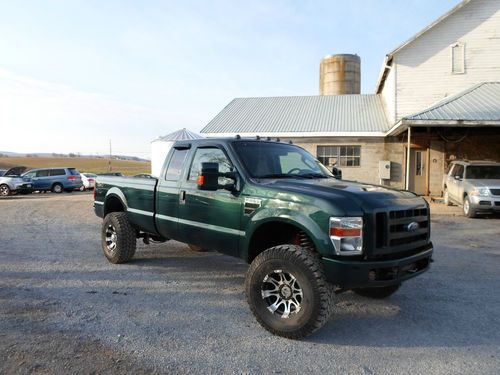 WOW WHAT A TRUCK!

ATTENTION GETTER!!
For Sale 2008 Ford F350 Super Duty XL 4-door extended cab.  6.4L twin turbo diesel! with 6sp Manuel transmission only 76k miles.  I bought this truck as a project for myself, the transmission seized up so it needs a new transmission. I bought it with a salvage title, the truck slid off the road when the transmission stuck, but it doesn't have much body damage besides a few dents and scratches.  However before I had it all fixed up  I bought a 2010 Dodge, so now I have to sell this one.  It has a lot of performance upgrades.  I bought it with them on so I'm not sure of all that it has, this much I know .. straight pipe with a DPF filter delete.  Sinister complete EGR delete.  AFE cold air in take.  South Bend Clutch, may need replaced with transmission. the truck has a new transfer case...These are too name a few.  I'm not sure what else it has on it.  The truck starts and runs no check engine, airbag, or any other light is on.  It is being sold with a PA salvage title sold AS IS no warranty.   Buy this truck and finish the project that I got delayed on!  If you need to ship this truck please check uship for rates. Or I can post it on Internet Truck Stop for you as well. Thanks.