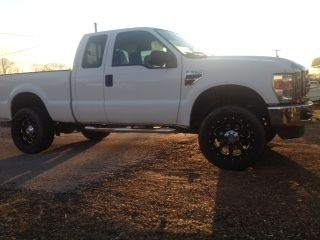 Condition: UsedA vehicle is considered used if it has been registered and issued a title. Used vehicles have had at least one previous owner. The condition of the exterior, interior and engine can vary depending on the vehicle's history. See the seller's listing for full details and description of any imperfections.Seller Notes:"Great!!"

Great Truck!!  Runs and drives great! Very powerful 6.4 turbo diesel!!   I bought this truck wrecked in the front over a year ago, NO FRAME DAMEGE. NO AIR BAGS CAME OUT. I bought a front off a 2008 truck and simply  unbolted the parts and bolted new ones on. The front was white so looks factory under the hood. Truck had miner dents and scratches so I repainted the truck, looks great shines much better then factory. Has 20 in fuel wheels with 33s tires have less then half tread. Has a 2 in leveling block in the front so the truck sets level. Has tilt, cruse, cd player with data port for phone or I pod. None power doors.  It once had something  bolted  back not Shure what. This is a great looking truck I get complements on it all the time. I have put over 10,000 trouble free miles on it. I love the truck, I just need a long wheel base for my utility bed. Save thousands my $15,500 reserve is around 10,000 Dollars under retail. Truck is for sale locally,   Call or text for more info 479-883-6479

The tire presser monitor shows fault due to after market wheels.