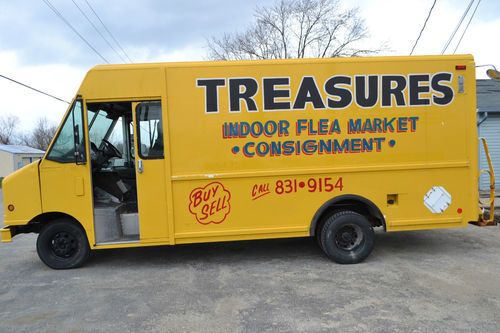 YOU ARE BIDDING ON AN UTILIMASTER BOX TRUCK ON FORD CHASSIS WITH LOW MILAGE.  INSIDE MEASUREMENTS ARE 14' LONG BY 7'8" WIDE BY 6'7" HIGH.  INSIDE IS ALL ALUMINUM AND HAS SHELVES ON BOTH SIDES THAT CAN FOLD UP.  NO DENTS BUT SOME SURFACE SCUFFS AS YOU CAN SEE IN PICS...THE DRIVERS SIDE WINDSHIELD IS CRACKED, DOORS SLIDE REAL GOOD AND THE OVERHEAD DOOR WORKS PERFECT WITH LATCH TO LOCK ALL CONTENTS.  HAS A SLIDER ALLOWING YOU TO PASS FROM THE CAB TO THE BOX AND DRIVES GREAT WITH GOOD TIRES.  READY TO BE PUT TO WORK.  WE USE THIS TRUCK LOCALLY FOR TREASURES FLEA MKT IN MOORESVILLE IN.  THE RESERVE IS LOW SO HAVE FUN BIDDING.  ANY QUESTIONS PLEASE CALL 317-371-6229 ASK FOR DARRYL