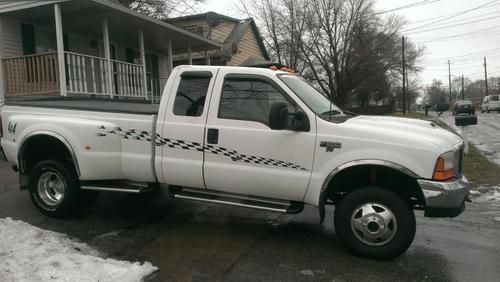 UP FOR AUCTION IS A 2001 FORD F350 SUPER DUTY XLT PICKUP TRUCK. IT IS A 4X4 DUALLY WITH AUTOMATIC TRANSMISSION. THIS TRUCK HAS ONLY 79,145 ORIGINAL MILES AND RUNS AND DRIVES BEAUTIFUL. POWER WINDOWS,LOCKS,MIRRORS AND CRUISE CONTROL. IT IS A 4 DOOR SUPER CAB AND IS POWERED BY A V10 TRITON ENGINE. ALSO EQUIPPED WITH OVERHEAD CAB RUNNING LIGHTS CUSTOM CHROME GRILL AND RAM AIR HOOD ORNAMENT. BATTERY REPLACED 6 MONTHS AGO. 6 NEW TIRES BF GOODRICH ALL TERRAIN T/A ON ALUMINUM WHEELS INSTALLED IN FALL AND HAVE APPROX 1500 MILES ON THEM. TRUCK IS ALSO EQUIPPED WITH RUNNING BOARDS AND STEPSIDE RUNNING BOARDS AS WELL AS FENDER FLARES. DUAL CHROME TIPPED EXHAUST. TOWING PACKAGE FROM FACTORY AND BEDLINER WITH TONNEAU RUGGED COVER. TRUCK RUNS AND DRIVES AWESOME. IT DOES HAVE SOME SCRAPES AND SCRATCHES AS IT IS 12 YEARS OLD AND SOME SURFACE RUST ON BOTTOM OF DOOR. TRUCK IS VERY POWERFUL AND CAN GO ANYWHERE. TRUCK IS SOLD AS-IS WITH NOW WARRANTEE OR GUARANTEE. ASK ANY QUESTIONS BEFORE BIDDING. TRUCK CAN BE PICKED UP ANYTIME AFTER MARCH 3 AS I WILL BE AWAY UNTIL THEN. GOOD LUCK BIDDING AND DON'T LET THIS TRUCK GET AWAY FROM YOU.