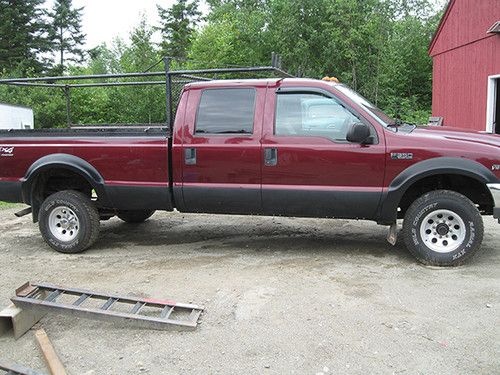 Condition: UsedA vehicle is considered used if it has been registered and issued a title. Used vehicles have had at least one previous owner. The condition of the exterior, interior and engine can vary depending on the vehicle's history. See the seller's listing for full details and description of any imperfections.Seller Notes:"TYPICAL 13 YEAR OLD WORK TRUCK"

2000 FORD F350 SUPER DUTY 4X4 CREW CAB- 6.8 V10 AUTO. RUNS AND DRIVES GREAT. LOADED TRUCK. HAS TYPICAL IMPERFECTIONS OF A 13 YR. OLD WORK TRUCK. HAS RUST IN REAR WHEEL WELLS UNDER FLARES. THE REST LOOKS GOOD. A/C COULD USE A RECHARGE, .  WILL ASSIST IN LOADING., BUYER IS RESPONSIBLE FOR ALL SHIPPING ARRAINGMENTS. I'VE HAD GOOD LUCK WITH U SHIP. ANY QUESTIONS EMAIL OR CALL GLENN 802-754-2978. I RESERVE THE RIGHT TO END AUCTION DUE TO A LOCAL SALE.