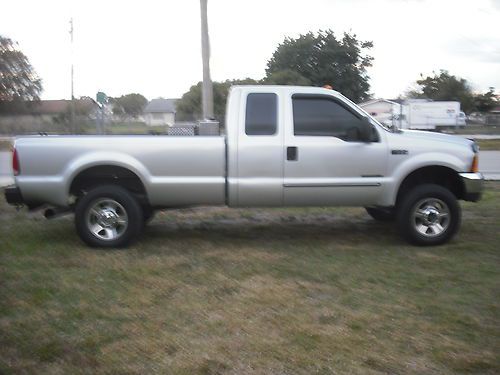 2000 FORD F350, EXTENDED CAB, 4X4, POWERSTROKE 7.3 DIESEL THAT RUNS EXCELLENT, ALL POWER EQUIPMENT,COMPLETELY SERVICED AND READY FOR WORK OR TRAVEL. I BOUGHT THE TRUCK A YEAR AGO FROM A FRIEND TO TOW BOATS FOR AMERACAT CATAMARANS. I CHOSE THE SIX SPEED FOR THE FUEL ECONOMY AND POWER FOR PULLING BOATS IN AND OUT OF THE LAUNCH RAMPS. WE NEVER ACTUALLY USED THE TRUCK FOR TOWING BECAUSE WE FOUND THAT WE COULD HIRE IT OUT FOR LESS MONEY THAN WE COULD RUN OUR OWN TRUCK USING OUR PEOPLE ON THE PAYROLL. WE HAVE BEEN USING THE TRUCK REGULARLY TO CHASE PARTS BUT IT IS SURPLUS TO US AND DOESN'T MAKE SENSE TO MAINTAIN AND INSURE A TRUCK WE DON'T NEED.

WE HAVE BEEN ALL THROUGH THE TRUCK FROM FRONT TO REAR IN ORDER TO ASSURE OURSELVES OF DEPENDABILITY WHEN TRAVELING BACK AND FORTH TO LOUISIANA WHERE WE SELL MOST OF OUR BOATS. I'LL GO OVER SOME OF THE MAINTENANCE WE PERFOMED......NEW TIRES AND ALUMINUM FACTORY 17" WHEELS A YEAR AGO.......NEW CLUTCH, BEARING,PRESSURE PLATE AND FLYWHEEL......ALL NEW AIR CONDITIONING INCLUDING COMPRESSOR........ALL NEW EXHAUST FRONT TO BACK.......NEW FILTERS........FLUIDS........NEW BRAKES ALL THE WAY AROUND.......NEW FACTORY 2011 BED TO REPLACE THE ORIGINAL ONE THAT HAD BEEN SIDESWIPED.....NEW TAIL GATE AND LIGHTS......NEW U JOINTS......NEW REAR BUMPER.......NEW BELTS AND HOSES.......I CAN'T REMEMBER IT ALL WITHOUT GOING THROUGH THE MAINTENANCE RECORDS AND RECEIPTS.    THE TRUCK HAS NEVER USED A DROP OF OIL OR ANY FLUIDS. TOTALLY DEPENDABLE AND PULLS LIKE A TRACTOR.  SHE NEVER MADE EVEN ONE TRIP TO LOUISIANA OR ANYWHERE ELSE BUT I WOULD DRIVE IT ANYWHERE IN THE COUNTRY....JUST FILL HER WITH DIESEL AND TAKE OFF. I THINK THERE IS A LITTLE RUST IN THE FRONT CHROME BUMPER BUT NONE IN THE BODY.THE MILEAGE TODAY IS 163,368 AND THAT MAY CHANGE BY A SMALL AMOUNT AS WE USE THE TRUCK OCCASIONALLY. THE ALUMINUM TOOL BOX AND TANK IN THE PICTURE ARE NOT INCLUDED IN THIS SALE.

I DON'T RECOMMEND BUYING FROM PICTURES SO COME ON DOWN TO SUNNY FLORIDA AND CHECK IT OUT OR SEND SOMEONE YOU TRUST TO DO IT FOR YOU. LOW BALLERS AND TIRE KICKERS ARE ALWAYS WELCOME AND ALL OFFERS AND TRADES WILL BE CHEERFULLY CONSIDERED NO MATTER HOW RIDICULOUS. CALL STEVE AT 772-201-1905 TILL 11PM EASTERN TIME WITH ANY QUESTIONS. THANKS FOR LOOKING AND GOD BLESS.    772-201-1905 STEVE