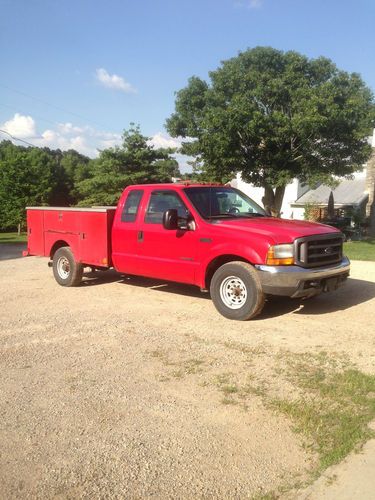 I am selling my 2000 F350 4 door Supercab with the 7.3L Powerstroke Engine with 211,000, Automatic, HAS GOOD A/C, It is 2 wheel drive, with a 40gallon fuel tank, and it has been used as a work truck and is still in good running condition, If you know about 7.3L powerstrokes then you know that this is a very reliable engine, The bed has some rust on the doors and the back left bottom cabinet has rust holes in it, the rest of the cabinets are in good shape, the truck overall has some rust on the doors at the bottom, hard to tell from the outside but on the inside bottom of the door is the bad spots, the interior is in good condition, the left front fender and hood are faded but not really that bad the abs light and air bag light are on but the speedometer works fine, needs abs module to fix the anti-lock brakes system, other than that the brakes work just fine and the truck runs like a champ, clean title in hand, please If you have any questions or you are wanting to buy, just give me a call my number is 812-584-3994, I work during the day so just leave a message or you can text me, I can send pictures of whatever on the truck. Buyer is responsible for pickup, and cash only during pickup!!!! I will not ship this Item unless you get everything arranged. Thanks