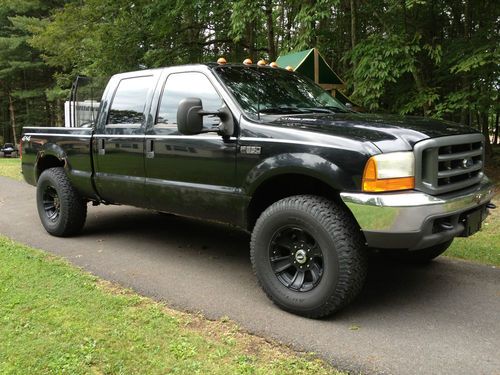 2000 Ford F350 4X4 Diesel Auto Crew Cab Short Bed.  This is a very dependable truck for all your needs. The motor has almost 193k miles and is very strong. Glow plugs may have to be replaced before winter.  It does have the block heater as well with plug mounted in front bumper.  Transmission was rebuilt last year with probably less than 2k miles put on since.  The truck did have a programmer on it but I removed it due to so much negative feedback about them.  It has a MBRP 5 in exhaust with an aftermarket cold air intake.  Oil changed every 4k mikes as well as fuel filter too.  Interior of truck is in very good shape but could use the carpet cleaned.  The body is in very good shape except the bed.  The bed may have to be replaced due to very bad rust over wheel wells and the bed crossmember. I was going to put a new bed on eventually but something has come up and now need the money. The wheels are 18 in XD revolver black and tires are BF Good-wrench 37/12.50/18 all terrains with great tread.  Also the truck has a new alternator with 2 new duralast gold batteries. This is a very good truck for the money and it has been very dependable to me.  Only selling now due to unforeseen circumstances.  Clear title in hand.   Low starting bed with no reserve.  Have for sale locally so reserve the right to end auction at any time.  If you have any questions please ask before bidding.  You will not be disappointed with this truck so happy bidding!!