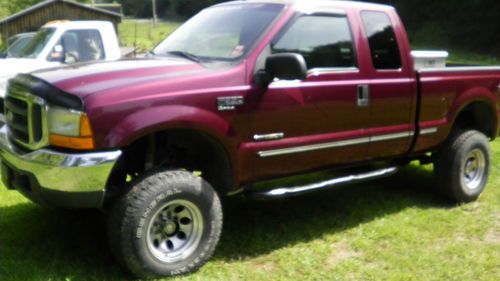 Condition: UsedA vehicle is considered used if it has been registered and issued a title. Used vehicles have had at least one previous owner. The condition of the exterior, interior and engine can vary depending on the vehicle's history. See the seller's listing for full details and description of any imperfections.Seller Notes:"Has few scratches here and there and are pictured"

I have a 1999 F-350 for sale. It is an extended cab short bed powerstroke turbo diesel with a manual 6 speed transmission. Hard to find rare setup in a 4wd F350. It has 251,000 miles on it and runs very strong and shifts great as well. It has had wheel bearings and all ball joints and new rotors and pads all put on within the last 3,000 miles. The clutch has also been replaced and the tranny and transfer case rebuilt. The truck does have the typical 99 oil leak but it doesn't leak much at all. The only rust on the truck is the driver cab corner and driver door inside just a little and has scratches in front of bumper on right side(See Picture). Rest of truck is very solid. The toolbox along with gooseneck ball and bed mat come with the truck. The tailgate is bowed on the inside and also showed in my pictures. Overall this truck is in good condition and will pull anything. The starter and alternator are also new and it has a fresh oil change too. I like the truck but I just bought a f150 newer truck and need to sell this one. The truck also has a small rancho lift on it. I believe its a 3 inch. It was on it when I purchased the truck. The tires are the general grabber at 2 and have over half tread still left. They are 285/75/16 on mickey Thompson 10" wide wheels. The truck is for sale locally so the auction may end early. Me reserve is set below blue book value in fair condition and I think truck is good but not excellent. Interior is good shape with very little wear hold in drivers cloth seat that I will sew within the next few days. Has grey cloth with vinyl floor. Also truck has edge evolution programmer with the 3 settings and the screen display. Thanks for looking and happy bidding.