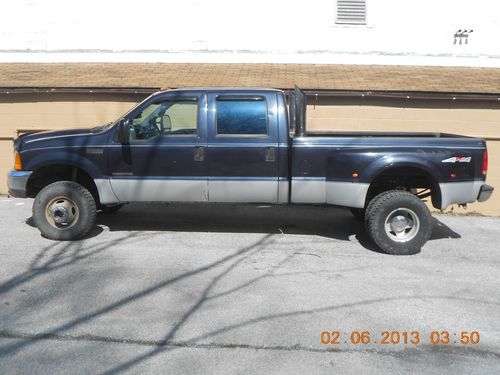 I am selling my 1999 Ford F350 XLT 4X4. This truck runs real great for the mileage it has, i used it for towing a 40' gooseneck trailer. To start it off it has a 2" level lift on the front end, Firestone airbags on the rearend, tires are more than half tread they are Goodyear 235/80/16. It has a manual transmission 6 speed, clutch is in great condition.There are a set of 6" stainless steel stacks in the bed, 2 programmer chips ( a TS 6 position- and a Edge Juice with Attitude has onboard screen with EGT,BOOST,RPM Gauge ). Has a single A-Pillar gauge with Boost. I have replaced alot of new parts since Dec 2012, such as NEW Batteries, Alternator,Surpentine Belt,Brakes,Calipers,Rotors all around, Front to Back,Tierods,Ball joints both sides, upper and lower. New 140 HP INJECTORS and HPOP about 2 YRS ago. Brand new Bellowed up pipes still in box ( $300 ), exhaust leaks from manifold pipes a little.New ECM replaced last year. Just replaced oil and filters. The body has some blemishes, it is a truck, used for work. The reese hitch in the bed does not go with the sale of the truck, the hitch bars stay with the truck. Thanks for looking. This is an as is sale. A $500.00 deposit is due at end of auction, the remainder due within 7 days by end of auction, paypal or pay at time of pickup. Email me and we can discuss arrangements. Thanks again for looking..