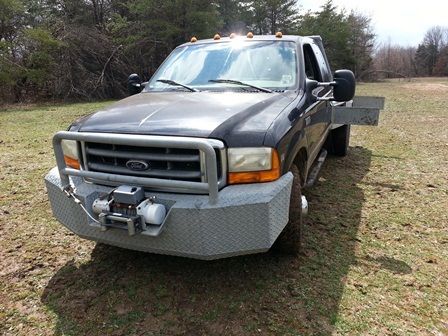 Up for auction is a Ford F 350 Diesel Pick-up truck. I bought this truck in 2004 with about 129k miles on it and drove it myself to now about 191k miles. It had the original bumper and that utility bed on it when i bought it. I took both off, built a new bumper that matches the bed and changed the bed to my needs. After that i ZINC-PLATED both. They will now last forever.

A few years ago the 4x4 transmission needed to be replaced. I did that but i never hooked it up to the shifter because i don`t need 4x4.  That is why i sell it as a 4x2. If you hook it up you will have it back to be 4x4. Truck runs and shilfts really good. I never towed any heavy trailers with one and used it only around the house from time to time. As you can see in one of the pics the windshield has a crack. the 4 storages under the truckbed can be locked so it`s always safe to store anything The bed itself is a little over 8ft. long.

This has been a work truck and not a show car. Expect some scratches and small dings. Feel free to contact me to have a look at that truck yourself. Reason for selling: I really don`t need it and it doesn`t make sense to have a truck just sitting around and been driven.