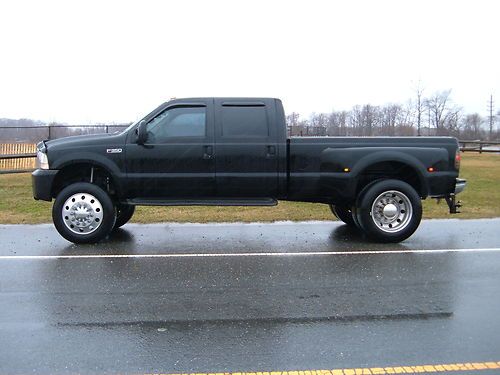 FINALLY PARTING WITH MY PERSONNEL RIDE.... A FULLY CUSTOM BUILT 1999 FORD F 350 XLT LARIAT  7.3L DIESEL CREW CAB 4X4 DUALLY...LOADED WITH EVERY OPTION....FIRST I INSTALLED A 6.5 FABTECH LIFT KIT, FOLLOWED UP WITH FOX SHOCKS W/ REMOTE RESOVOIRS,ADDED A PRO COMP DUAL STEERING STABILIZER, 8 TO 10 LUG ADAPTORS,AND FINISHED OFF W/ A SET OF 22.5 ALCOA'S TO GIVE IT THAT BIG RIG LOOK...TO MAXIMIZE THE PERFORMANCE OF THE "BULLET PROOF" 7.3L DIESEL ENGINE, I ADDED A MBRP 4" STAINLESS STEEL EXHAUST FROM TURBO BACK, A TS 6 POSITION CHIP,CAT BATTERIES, AND AIR INTAKE.. INSTALLED A BANKS INTERNAL SHIFT KIT IN TRANS, AND A SET OF PILLAR GAUGES TO MONITOR PERFORMANCE WHILE TOWING...NEXT I ADDED ACCENTS TO EXTERIOR....... CUSTOM GRILL, CUSTOM FRONT BUMPER W/ PIAA LIGHTS, EURO STYLE REAR TAIL LIGHTS, 2003 FORD CLEAR HEADLIGHTS, SMOKED RUNNING LIGHTS, CLEAR ROOF CLEARANCE LIGHTS, SPRAY IN BEDLINER, TOPPED OF W/ A TONNEAU COVER, AND FINISHED OFF W/ A SET OF AIR HORNS W/ REMOTE COMPRESSOR MOUNTED ON PASSENGER FRAME RAIL... THEN I FINISHED OFF THE INSIDE...2003 FORD DASH, KING RANCH DOOR PANELS, OVERHEAD DVD PLAYER, AND THEN ADDED A AFTERMARKET VIPER ALARM SYSTEM W/ REMOTE START....DRIVETRAIN ON TRUCK HAS 137,000 ORIG MILES, JUST BREAKING IN.... ENGINE IS OUT OF A 2000 FORD F350 7.3L DIESEL W/ NOW ONLY 70,000 MILES ON IT, W/ A FULL WARRANTY ON MOTOR TO THE END OF FEB 2013........HAVE FULL WORK REPORT ON MOTOR SWAP, AND WORK WAS PERFORMED BY ROB, THE OWNER OF DIESEL SOLUTIONS.... ANYONE AND EVERYONE AROUND NJ KNOWS ROB OF DIESEL SOLUTIONS IS THE BEST, MOST KNOWLEDGABLE DIESEL MECH AROUND...... ENGINE NEEDED TO BE SWAPPED OUT DO TO FAULITY CRAFTMANSHIP AT STROKES CRAVEN FORD IN MANNIG S.C., WHICH LED TO DESTRUCTION OF MY OTHER MOTOR.... OVERALL THE INTERIOR IS IN EXCELLENT CONDITION W/ NORMAL WEAR AND TEAR. EXTERIOR IS ALSO IN EXCELLENT CONDITION, W/ PAINT SHOWING A BEAUTIFUL SHINE W/ A COAT OF WAX..... MINUS A COUPLE DOOR DINGS, A SCRATCH ON LOWER DRIVERSIDE, AND FEW BUMPS AND BRUISES ON REAR TAILGATE, THE TRUCK IS NEAR NEW.....TRUCK IS TURN KEY W/ A FRESH OIL CHANGE.....CLEAR TITLE IN HAND......THANKS FOR LOOKING