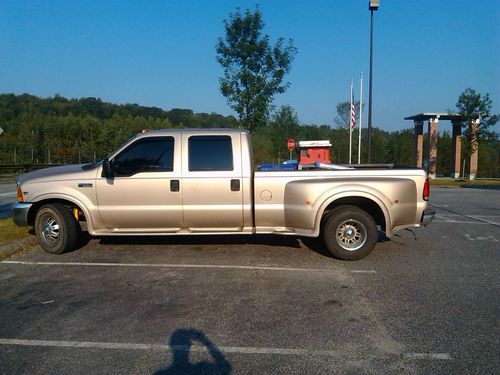 Condition: UsedA vehicle is considered used if it has been registered and issued a title. Used vehicles have had at least one previous owner. The condition of the exterior, interior and engine can vary depending on the vehicle's history. See the seller's listing for full details and description of any imperfections.Seller Notes:"Interior is in mint shape, no tears or rips. Exterior is 98%. There are a few cracks in the rear fender flares."

Near mint 1999 Ford F350 Super Crew 7.3 Turbo Diesel. Truck has a brand new transmission from Ford, installed by ford with a 3 year warranty. Digital pyro, boost and oil temp gauge. electronic brake setup, 25k fifth wheel plate included. 100% reliable truck. Brand new moog upper and lower ball joints and front shocks. has factory cd/tape player. pulls great, goes great. just down sizing. Also have after market chrome rims. dark tinted (all the same) windows all the way around except windshield just has the 6" strip. Only seen one winter. Truck has 118,000 miles on it. Amazing heavy duty reliable truck. Im only selling to go to a 4wd so I can plow.