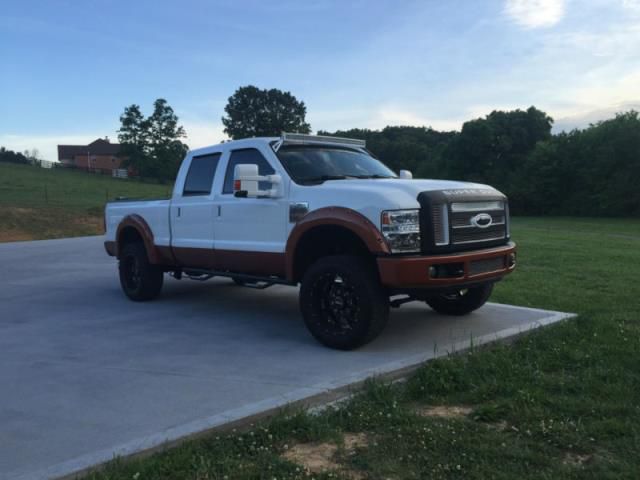 Power Everything, Heated seats, AUX switches, Moonroof, Power sliding back window, Keyless entry, King Ranch Leather. LED interior lights. Kenwood Double DIN headunit with DVD, BLUETOOTH, AUX, USB, has back-up camera but isn't working. Polk Audio Sound system, has mostly MM series installed. 2x 6x9'', 2x 5.25'', 2x 5'', 2x 6.5'', 4x 1'' tweeters. 3x Polk audio 1000w amps and 1x Rockford Fosgate amp. Also has 2x 10'' Rockford Fosgate P2 Subwoofers. 3 Farat capacitor. All the speakers are installed but not all of them are hooked up. Oil changes and filter was done every 3k miles and fuel filters etc every 6k miles. Bushwacker Fender flares Had the original cream/silver lower two tone painted to match the King Ranch Color. Truck is two-tone White and bottom is Copper King Ranch, with the fender flares Color Matched, and front and rear bumpers. Leveling kit installed, which raised the front 2.5'' and the rear 1'' BMF NOVAKANE death metal wheels 20'' wrapped in Falken 305/55/20 tires. 2x are brand new and 2 are about 50% thread left. Brake Calipers brand new at about 128000 and white paint matched. Has the Performance vented and slotted Brake Rotars also installed at 128000. Go-Rhino Dominator black side-steps. Window Flare-Vents that is painted color matched. Mirrors are paint matched also. Power folding, power telescoping and heated Passenger Mirror has a piece broken out at the bottom, see pics. Bed has LINE-X Bedliner and the whole underbody has been LINE-X'd. Also all the black outside plastics has been LINE-X'd and front grill. Grill and front bumper has Aluminum Grill inserts. Front Grill also has custom white paint with the 32''LED Bar built in. LED bar wasn't built-in that well so sometimes it tilts when opening and closing hood. 50'' Rough Country Curved LED Bar installed with Rough country brackets all painted to match. LED Back-up lights. Halo front Headlights with 2X 6000K HID's on each side. Foglights are also 6000K HID. Truck is all round good condition, I would give it a 7.5-8 out of 10. anything expected for a truck with 132000 miles. It's not perfect.