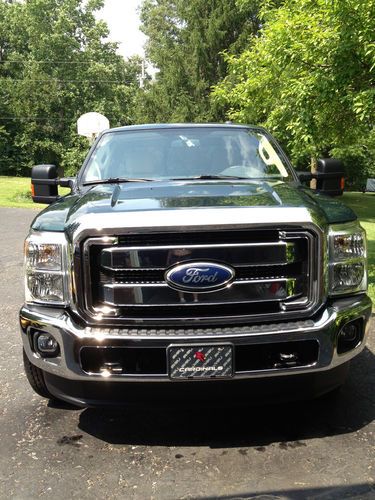 Beautiful garage kept 2011 F250 Lariat.  The exterior is a flawless deep metallic green.  The interior has tan leather seating.  Both the driver's seat and the passenger's seat are power seats.  The middle seat folds down to form an arm rest with a place for two (2) cups and an I-Phone.  The Sync system is a great addition to this vehicle.  When coupled with the satellite radio, you've got an entertainment system which is hard to beat.

The backup camera and sensors are invaluable for parking this vehicle.

This truck has been professionally maintained by a Ford Dealer and includes the balance of the factory warranty.  The truck has never been off-road and has only towed a light utility trailer.

The 6.7L Turbo Diesel is a superb engine.  It easily could tow anything you choose while delivering great fuel mileage.  I have averaged 17.2 MPG since buying the truck in August 2011.  With the exhaust filtering, this truck does not smell like the past diesels and there is no soot or black smoke belching from the tailpipes.

I am purchasing a new vehicle and the dealer has offered me $42.5K as a trade-in value.  These trucks new listed for over $56K.  This is a great opportunity to purchase a great truck for a great price.