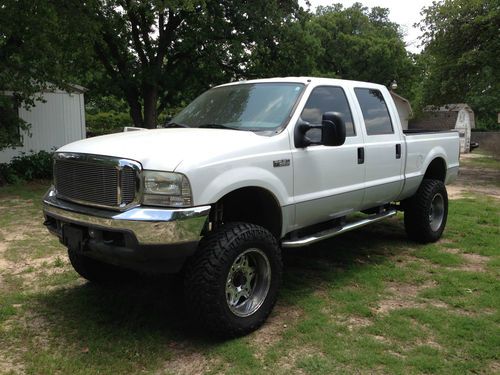 I'm selling my 2002 F-250 7.3L diesel XLT crew cab 4x4 short bed with grey cloth interior with 143k miles, power windows and locks with 6" suspension lift, 20" wheels and 37" nitto trail grappler tires that are like brand new!!! Double din touch screen kenwood with back up camera, 2 kicker solo baric 10" speakers behind back seat, billet grill, edge juice programmer , intake filter kit, 4" exhaust. Truck has a rebuilt transmission from AAMCO with 4,000 miles on it. The very top part of the roof on the truck has some paint chipping other than that the paint is good.  This truck is awesome and needs nothing!!! Clear Green Title, $18,500 shoot me text if interested with questions or if you'd like me to send you a video of it running and one of the interior.  405-823-0922