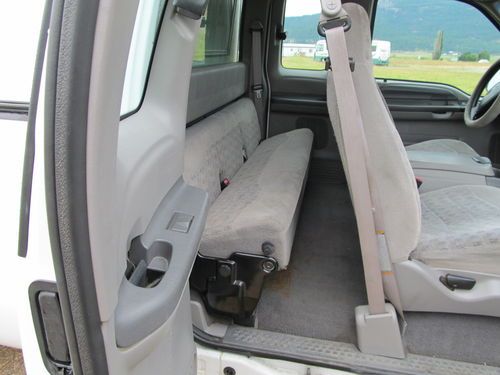 Need to pull some heavy stuff? Here is your work horse! This is a 1999 Ford F-250 power stroke 2X4 truck with a manual transmission. This truck is a XLT model and has mainly highway miles on it. This truck is in great shape! It currently has 236,727 miles on it, but drives excellent! It may have a few miles, but it has Ford's most popular diesel engine ever!
This truck is loaded up with all the basic things you need in a work truck. It has power windows, power locks, power steering, cruise control, air conditioning, and will seat five people comfortably.
This truck has a full canopy on it, this creates a secure area for your cargo as the canopy is lockable! The truck is equipped with a class five tow package and is wired for all of your trailer needs.
You really need to see this truck to believe it! This truck is in better shape than most with one quarter the miles. Do not miss your chance to take this one home with you! Call Kris LeCaire today at Booth and LaDuke motors in Colville Washington. We can schedule an appointment for a test drive!
(509)680-5760 Cell Phone
(509)684-8400 Office Phone