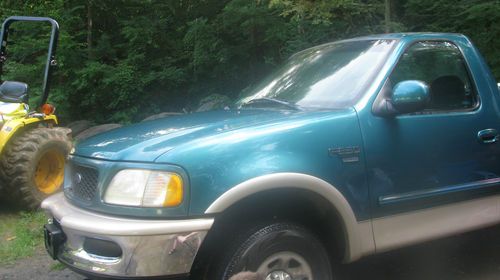 Condition: UsedA vehicle is considered used if it has been registered and issued a title. Used vehicles have had at least one previous owner. The condition of the exterior, interior and engine can vary depending on the vehicle's history. See the seller's listing for full details and description of any imperfections.Seller Notes:"Donut gasket, wiper arm and starter."

Good running, clean looking F-250. Was a daily driver until the family outgrew the regular cab. 4.6 with 195,000 miles, but has always been dependable. 5 speed manual with about 40,000 on the current clutch. No leaks and only uses about a quart of oil in-between changes. Has been serviced by myself regularly. Interior is almost perfect with the exception of the headliner. It has a few tears and holes. COLD a/c - power windows/locks - cruise and tilt. Factory AM/FM cassette. 60/40 Split bench with storage console.
Exterior is in good condition. A few small spots with clear coat issues and just a speck of rust on the fender above the wheelwells. It is currently in need of 3 things. Donut gasket for the exhaust. Inspection still good though. A wiper arm and the starter will sometimes act up.
Tires are still good - probably around 60%.