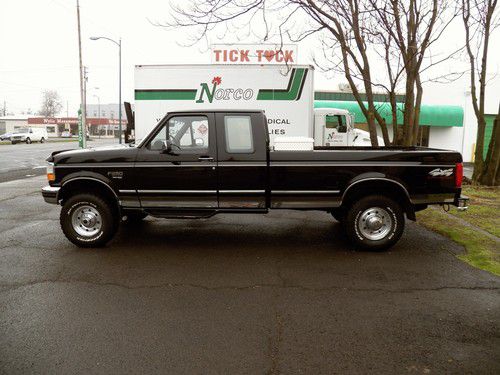 107,400 Original Miles (179,000 kilometers), 1 Owner(my Dad), Very Nice 100% Original Paint, No accidents, Never Lifted, No Performance Chips, Original Exhaust, Never smoked in, Super clean interior and seats, headliner, carpet, perfect factory tinted Sun-X glass, Air conditioning works perfect and has never needed service, Factory Running Boards. This truck is exceptional.  Box has small scratches and a few little dents.  I have taken pictures from as many angles as I can to capture the dents and the fact that this truck is straight.  All the original center caps and mud flaps are still on the truck since he was very careful about who he even let work on it or put tires on it. Front brakes have less than 1000 miles on new rotors and pads.  Transmission fluid, transmission filter, engine oil, & filter has been changed.  This baby is ready to go.  Stored indoors it's entire life.   This was my dad's dream truck that he bought when he retired and sold the farm in 1998.  He is now 82 and has no need for such a truck.

You won't see one of these 7.3 body style trucks in this kind of condition with low miles as well as having a very desirable color.  If you have any questions, I do not answer emails, please call me at 509-529-7780 or on my cell at 509-200-9460.  No Dealers, tire kickers, low ballers or trades.  Serious Buyers with money in hand. Thank you  Tim

Forgot to mention that this truck has key-less entry.  Keys to the dry box are also included as well as 3 truck keys and 1 key FOB.  Other key FOB's are available on eBay($15-$40) and are easily programmed by you without any equipment as long as the original is present.

This is a used truck with all it's original equipment and paint.  It is not a show truck and it does have little rock chips here and there along with some light scratches at different parts of the body.  If this truck was any other color than black you would never see the imperfections, but black hides nothing.  This truck carries no warranty of any kind, but is available for inspection and this is encouraged.  It is the responsibility of the buyer to inspect the vehicle in person or arrange to have a 3rd party inspect it on their behalf.