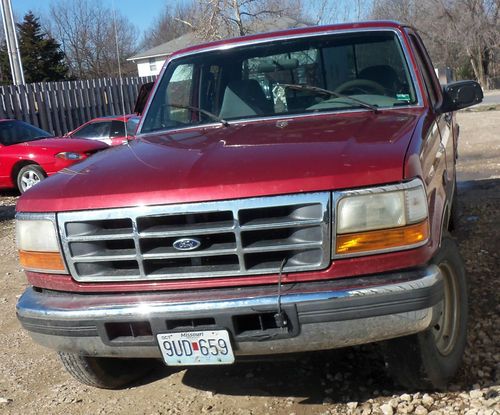 Condition: Used: A vehicle is considered used if it has been registered and issued a title. Used vehicles have had at least one previous owner. The condition of the exterior, interior and engine can vary depending on the vehicle's history. See the seller's listing for full details and description of any imperfections. ...
UP FOR GRABS IS A 1996 FORD F250 EXTENDED CAB POWER STROKE DIESEL
IT STILL RUNS GREAT
THERE ARE A FEW SCRATCHES AS SHOWN IN THE PICTURES
ON THE PASSENGER REAR EXTENDED PART THERE IS A LITTLE RUST,
ON PASSENGER SIDE BED ABOVE WHEEL WELL THERE IS SOME RUST ALL THE WAY THROUGH
THE LETTERS FORD ARE MISSING ON THE TAILGATE
DRIVERS SIDE ON THE BED ABOVE THE WHEEL WELL THERE IS SOME RUST ALL THE WAY THROUGH
THIS TRUCK IS A TWO WHEEL DRIVE WITH DUAL TANKS
PLEASE ASK ANY QUESTIONS BEFORE PLACING YOUR BID
FEEL FREE TO CALL ME AT 816-721-4767 FOR AN IMMEDIATE RESPONSE TO ANY QUESTIONS
THIS HAS A CLEAR TITLE AND IS READY TO BE DRIVEN HOME
WINNER IS EXPECTED TO GIVE A $500 DEPOSIT THROUGH PAYPAL WITHIN 24 HOURS AFTER AUCTION ENDS
THE REMAINING BALANCE IS DUE WITHIN 7 DAYS OF AUCTION ENDING
IF TRUCK IS NOT PAID FOR THEN E-BAY WILL BE NOTIFIED IN ORDER TO RECOVER FEES
IF YOU NEED A LITTLE EXTRA TIME TO MAKE ARRANGEMENTS FOR PICKING THE TRUCK UP JUST LET ME KNOW
HAPPY BIDDING AND GOOD LUCK!!