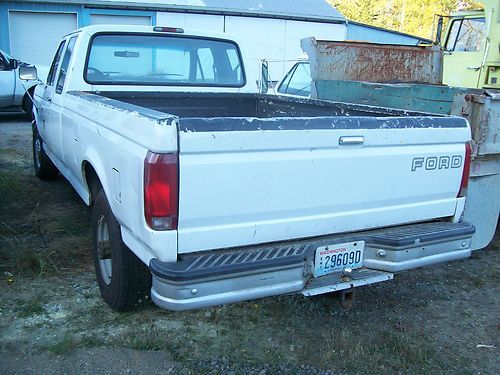 Condition: UsedA vehicle is considered used if it has been registered and issued a title. Used vehicles have had at least one previous owner. The condition of the exterior, interior and engine can vary depending on the vehicle's history. See the seller's listing for full details and description of any imperfections.Seller Notes:"Used fleet vehicle, scratches, dirt construction truck"

City Public Works truck for many years served us well, Purchased   This is an 1995 Ford F250 extended cab bench seat front and rear, I believe this is a V8 351 with c 6 3 speed auto I will confirm that info.   everything works ,  ,  has wear and tear from a fleet type vehicle   Tires are good , starts runs and drives, Clear Title buyer will need to remove from city lot, with new registration or trip permits as the exempt license will be removed