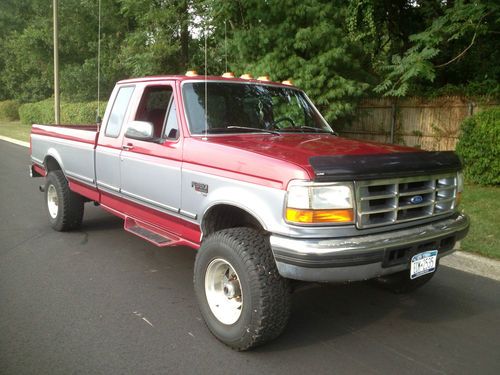 Truck had 8.9 miles on it when I drove it away from the dealership on March 18, 1995.  I changed the oil and filter on the truck every 3,000 miles and oil came out just as clean as when it was put in.  When the truck hit 80,000 miles, I then changed the oil every 5,000 miles.  I have the dates of every single oil change recorded and the exact mileage as to when it was done.

I never used the truck as a work vehicle.  This was for personal use only and has never been smoked in.

I have receipts and recordings of work and complete maintenance history done since 1995.  There are a few minor scratches on the body of the truck, but nothing too severe for a 17 year old truck.  There are no rips or tears in the interior.  Everything works as it should.  Pictures taken of the truck in this listing were taken on August 31, 2013.

This truck is being sold as is.  You are more then welcome to come and view the truck prior to the auction close.  The buyer is responsible for all shipping costs associated with this purchase.  The title is clean from the NYS DMV.  A $500.00 deposit is due within 48 hours of auction close and is NON-REFUNDABLE.  If you have any additional questions to ask about the truck, please do so.