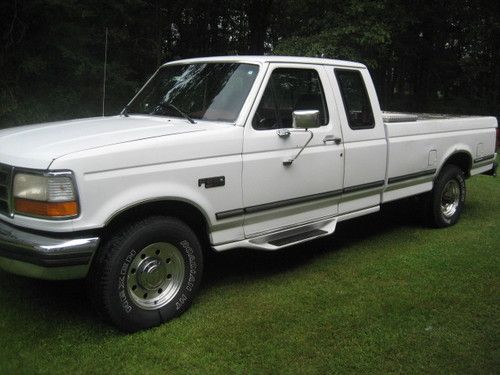 Condition: Used: A vehicle is considered used if it has been registered and issued a title. Used vehicles have had at least one previous owner. The condition of the exterior, interior and engine can vary depending on the vehicle's history. See the seller's listing for full details and description of any imperfections. ...
Up for sale is a 1995 Ford F-250 Extended Cab with a 7.5L 460. Its shows 168563 mileage. Motor was replaced in Oct. 2011 with a rebuilt motor. With around 152000 miles on it. Truck has headers, Towing Cam, Flow master exhaust. Tires are in great shape 10ply. Now it has one Bad header gasket leak on the drivers side. I already bought the Percy's aluminum Header gaskets. I just haven't had them replaced yet. If you compare this truck with other ad's you will see that my price falls way under others pricing. I deducted the Header gaskets Labor. And you probably wont find one with a 460 in it! I will be able to meet you in Murray Ky 42071 just about any time. . Thanks for Looking. As Is No Warranty!                                           Call 731-498-6444 or cell 270-226-0155 txt ok