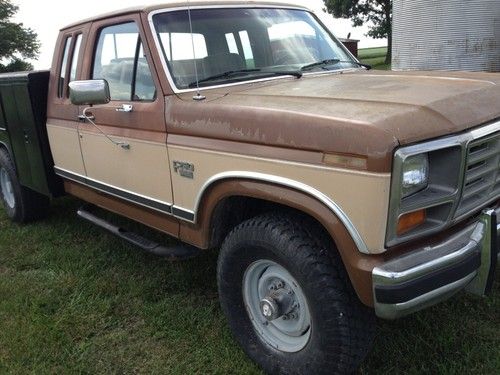 Up for Auction is a 1986 F250 4x4 Extended Cab Diesel, I bought this truck with the Intentions of fixing it up, but have decided to head a different direction. What ive done since I bought it, New Injectors, New Glowplugs, New Glow plug Controller, New Glow Plug Relay, New Return Lines. The Tires are Newer, I had Intentions of replacing them with stock sizes and selling the Offroad tires to offset the cost. The Truck currently has a tool box bed on the box, Its seen better days as some of the compartments are rusted out. My plan was to simply rip it off and install a flat bed. The Passenger side window motor gear went bad so I currently have it apart. The Brakes feel soft to me, I just haven't had a chance to tear into them and see what the Issue is. Im currently away from the Truck but if I recall correctly it has roughly 169K (Ill Clarify that next time im out there) on it. The Batteries are Old and they aren't too far away from being replaced, I started it up and drove it around this afternoon, It seemed to shift a little harder than I would have liked, but im also used to my New Ford, It does have a C6 Automatic.  Its a Used Truck.. Don't expect to jump in it and head across the country If would like to inspect it, Simply send me a message with a contact number and we can make arrangments. The Truck is Located in Mexico, Mo 65265. Ill also be including a box full of Filters and What Not. It has some Rust in the Extended cab corners, some Paint Peeling etc.. Ive tried to list all the details that I can think of, Its Sold AS-IS., As I stated earlier it will need some work to make a reliable daily Truck IMO.