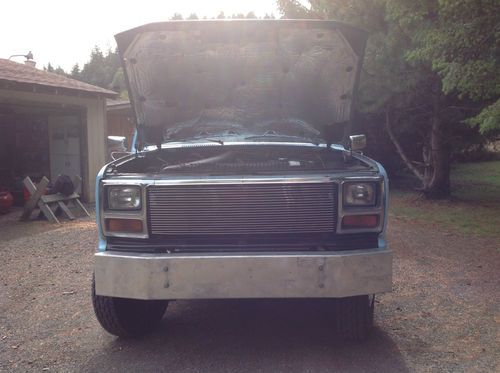 1986 (titled as a 1985) Ford F250 plain Jane with a fresh 6V53 Turbo Detroit Diesel, two-stroke, twin cam, blown and turboed!  You've got to hear this thing to believe it!!  Purchased from the original owner who owned his own diesel repair shop, started out with the 6.9 Ford (International) diesel.  About 11,000 miles ago the owner pulled the cab & bed off and did the conversion to the Detroit Diesel, put the turbo on it, did the exhaust plumbing, put new cab mounts & lifted and painted it and put a heavier duty 5 spd O/D ZF tranny in it.  You just about need to double clutch it, so it is a pretty heavy duty trans.  Not sure about the rear diff if it was upgraded or not, some might be able to tell by the photos.

So the mileage reads a little over 134k but the whole thing was freshened up including the engine, blower & turbo gone through also at that time 11k miles ago.  This thing really turns heads, as people are not expecting it to sound like it does and then they try to figure out what it has in it, a lot of fun!!
I give the complete drivetrain, tires & brakes a 10.  The body, paint, chrome & glass between a 7 to 8.  The interior about a 8.  Drives down the road straight, stops straight, shifts great, very comfortable for a regular cab.
Its not a show truck but it is a very usable, very heavy duty, very powerful, everyday work truck/hot rod!!
Call Greg at (775) 848-2445