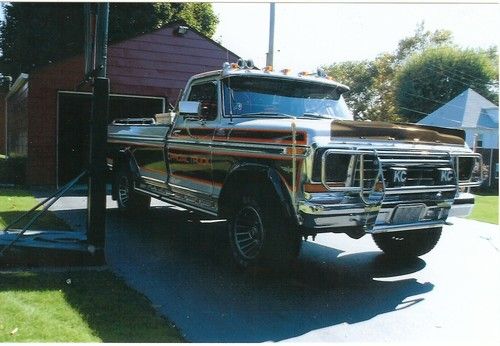 THIS TRUCK IS ONE OF A KIND. IT WAS FEATURED IN 1979. I HAVE THE ORIGINAL DEALER POSTER FROM THE LOCAL FORD DEALER(INCLUDED IN SALE). IT HAS HAD CUSTOM INTERIOR ADDED. I HAVE THE ORIGINAL SEAT IN PERFECT CONDITION(INCLUDED IN SALE). I JUST PUT $800.00 DOLLARS IN NEW TIRES. IT HAS THE 400 ENGINE,4X4,A/C,ORIGINAL PAINT(SOME STRIPES AND ACCY'S ADDED),TWIN SUNROOF,CB RADIO,& TONS OF CHROME & LIGHTS.

THERE ARE A FEW MINOR HAIRLINE SCRATCHES FROM NORMAL USE(NOT VISABLE UNLESS YOU ARE REALLY LOOKING FOR THEM) THERE IS A VERY SMALL DENT SIZE OF A NICKEL IN THE LEFT REAR BED NEAR THE LEFT REAR MARKER LIGHT. I  DID NOT WANT TO HAVE ANY REPAINTING ON THE VEHICLE PRIOR TO SELLING IT. THE BED LINER HAS A CRACK ON EACH SIDE. THE FRONT WINDSHIELD HAS BEEN REPAIRED.

I AM THE SECOND OWNER. MY GRANDFATHER WAS THE ORIGINAL OWNER.

BUYER IS RESPONSIBLE FOR SHIPPING