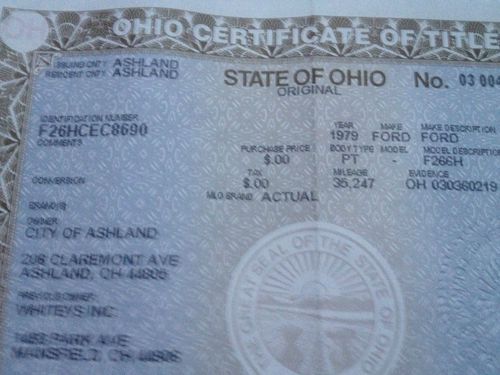 Condition: UsedA vehicle is considered used if it has been registered and issued a title. Used vehicles have had at least one previous owner. The condition of the exterior, interior and engine can vary depending on the vehicle's history. See the seller's listing for full details and description of any imperfections.Seller Notes:"I have a 1979 ford F250 4x4 with a working snow blade and only 54,000 orginal miles, I believe I am 3rd owner. I purchased this truck from The Ashland Fire depatarment in Ohio, You will see it in red from purchase I recently had it repainted in bright orange with black accents , this is a sharpe truck and head turner,beleive it is the 400 motor, wIt starts right up and runs and sounds great , the transmission and 4x4 work great just as they should, it has new paint , new tires ,new battery,new power steering pump,new door and window weather stripping,new seat,it will need a new exhaust manifold gasket eventually on the passenger side,with the hood open you can slightly hear exhaust from header gasket area. I don't know if the cruise control works as i have never tried it, and know the radio speaker needs replaced , I have a ton of pictures for you to look at , this is a very clean and low mileage truck, well cared for truck in rare condition, this truck is 100% mechanically sound,"

Rare condition 1979 Ford F250 4x4,  with a meyers snow blade, this truck is mechanically 100% sound , tight front end , good suspenshion, transmission and Transpher case in top condition , No Slipage at all , does not burn any oil, the Snow blade works great , all lights, wipers , blinkers ,running lights,  and brakes are good and operate as they should , Please see photos attached , this truck looks , and operates  as good as it looks, winter is comming , bid with confidence , this truck will take you anywhere, when i purchase the truck , i drove it back from Ashland ohio with out any problems , it runs and drives great.