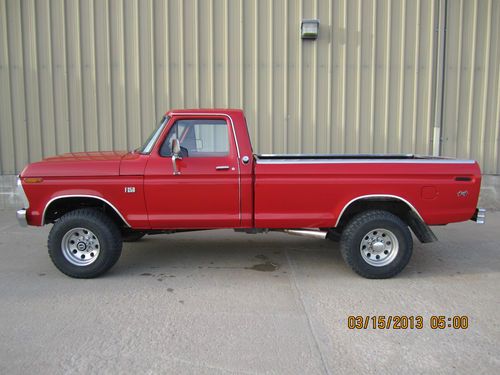 I have a 1975 Ford F-250 4X4 High Boy up for bid. It has a rebuilt 460 12,000 miles ago, 4 speed manual transmission. Body work is all done NO Rust or Dents, Paint is 2 years old and looks great. 1 scratch on the back side of the roof that is shown in the picture and a couple of rock chips.  Interior is original the seat sits ok but is torn on driver's side, the dash is cracked, and it needs a roof liner.  Have all the trim for the roof liner the pieces are in good shape.  Have aftermarket oil pressure and water temp guages and tachometer.  The original guages are not working.  The speedometer works and the Gas guage works.  Runs and drives great.  Pickup is all restored except for the interior, but wont take much to finish.  The front grill is dinged up a bit and needs replaced as seen in the pictures.  This is a awesome pickup and is a head turner.  For any questions you can call 308-760-0661.  Buyer is responsible for pickup or shipping and a $500 deposit is due within 24 hours of auction ending and full payment within 3 days of auction close.