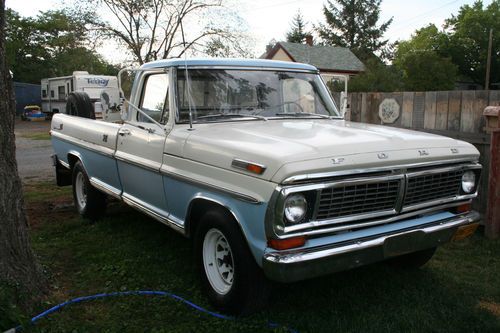 Condition: UsedA vehicle is considered used if it has been registered and issued a title. Used vehicles have had at least one previous owner. The condition of the exterior, interior and engine can vary depending on the vehicle's history. See the seller's listing for full details and description of any imperfections.Seller Notes:"Has minor scratches a little rust and a few minor dents See description"

Has Factory radio, CB antenna Hookup, Heavy Duty Leafs, after factory tow reciever hitch, and extra camper tie-downs on bed and tie down that runs under the truck. Has a camper electrical hookup that is located near the driver door for easy hookup. also has a separate electrical hookup on the rear reciever hitch to haul and supply power to trailers. Behind the seat tool box for extra storage. Also is equipped with engine block heater to prevent cold starts.

This truck does have some minor dents and a few rust spots but nothing major that I have found. Has what I was told is a 390 engine But I'm no expert. everything appears to be original to me and in excellent condition for this year of truck.

The interior is in great condition with the factory radio in it and it still works. the seat is fading in color for the original black but it is a two tone seat with leather-like strips breaking up the fabric. there is no tears that I can find in the seat. There is an extremely nice storage box behind the seat where you can store quite a bit of stuff. The fuel gauge appears to not work although I'm not sure why could be a fuse? It has power steering which is excellent to have when driving compared to the manual steering. This is also an automatic. There is no tears in the arm rests either the wire laying on the floor is the CB antenna which you just run through the side vent and hookup to the mirror and youre ready to plug in the CB.

I am the third owner of this truck The first bought this new while in the airforce, The second had owned this truck for 35 years and used it as his dependable truck.

Truck is sold as-is please ask all questions before bidding. It runs great.

This is an excellent truck, runs great and looks excellent . don't miss out on this 1970 Ford F-250 Sports Custom Truck.