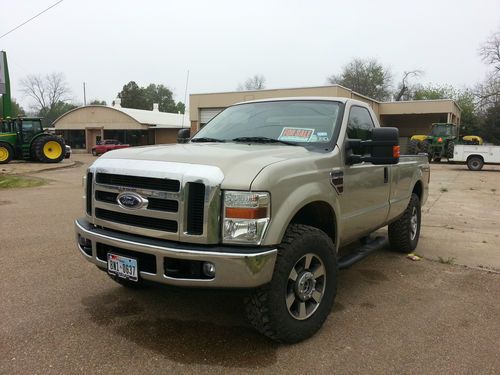 I purchased this vehicle from a local dealer with 14,000 miles on it.

The only odd thing about the truck is that it was special ordered with a rubber floor mat instead of carpet.  Other than that all of the rest of the features are normal for an XLT.
- 6.4 diesel with 5spd Torqshift automatic transmission with tow/haul mode
- towing package
- camper package
- 4WD with shift on the fly capability
- tailgate step
- integrated trailer brake controller
- upfitter switches
- 3.73 axle ratio
- towing mirrors
- Wet Okole seat covers

An OASIS report I had run when I purchased the truck confirms that it has had no failures to date other than a radiator replacement around 20,000 miles (due to leak).

The only thing on the truck that is not completely stock are the tires, everything else is in its factory configuration.  I had a set of 285/75 R18 Toyo Open Country MTs installed around 2,000 miles ago.

The truck is mechanically sound as it is, and I wouldn't hesitate to drive it anywhere.  I bought it to haul my Jeep around, but I've found that I don't go wheeling as often as I used to and I'm looking to liquidate some of my wheeling stuff.  It does have a few minor rock pecks, etc here and there, but none are major.  The truck was not used to tow heavy loads and the vast majority of the miles on it are highway miles.

All maintenance has been done with Motorcraft consumables (other than the use of John Deere Plus 50 II engine oil, which meets all of Ford and the API's requirements for the engine).  Engine oil was changed every 4,000 miles, and fuel filters were changed with every other oil change.