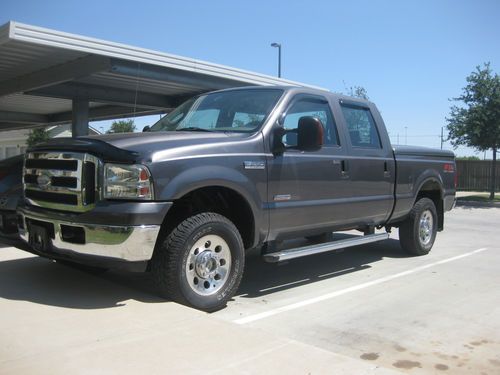 2005 Ford F-250 Crew Cab XLT 4X4, Silver Exterior And Gray Cloth Interior, Loaded With a 6.0L. Power Stroke Turbocharged Diesel Engine and Automatic transmission, Factory Alloy wheels And almost New Tires, Ice cold A/C. This vehicle comes with a goose-neck bed hitch,window and hood visors, tow package system and complete bed custom hard cover.Looks & runs great. No accidents. Non-smoker.No Pets inside,Performance tires. Power everything. Runs & drives great. Very nice interior.Little Normal wear showing, very little dents and scratches on it, no chips and breaks on windshield. Front seat has a small tear but does not show because it is covered with whole seatcovers.THIS VEHICLE IS ALSO BEING SOLD LOCALLY, SO WE RESERVE THE RIGHT TO END THIS AUCTION EARLY IN CASE THE VEHICLE SELLS LOCALLY BEFORE AUCTION ENDS.For more information or pictures feel free to give me a call at 956-285-9101 or e-mail me at : bicho_cardenas@hotmail.com