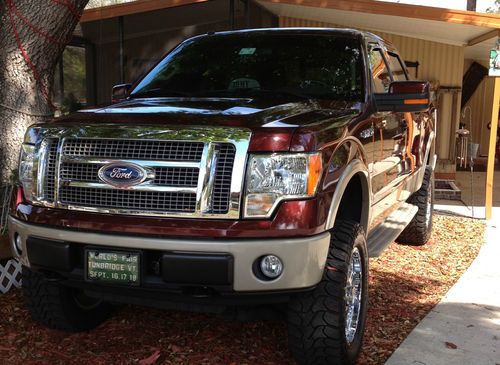 I AM SELLING MY NICE CLEAN 2010 FORD F150 DUE TO HEALTH REASONS, I CAN'T USE THE TRUCK ANY MORE TO HARD TO GET IN AND OUT OF SINCE MY SURGERY.  AS YOU CAN SEE IT HAS BEEN TAKEN CARE OF VERY WELL AND GOES TO DETAIL SHOP EVERY SUNDAY TO GET DETAILED, ALL SERVICES ARE CURRENT AND IT HAS SYNTHECTIC OIL IN IT, ALSO HAS MICKEY THOMPSON TIRES AND NICE WHEELS WITH LITTLE WEAR THEY WILL LAST ALONG TIME, IT HAS DUAL EXHAUST AND SOUNDS VERY GOOD.  I HATE TO HAVE TO SELL THE TRUCK BUT AS I SAY I AM HAVING TROUBLE GETTING IN AND OUT OF IT NOW, PLEASE FEEL FREE TO CONTACT ME FOR ANY QUESTIONS, EMAIL ANY QUESTIONS PRIOR TO BUYING AND THERE IS A 500.00 DEPOSIT REQUIRED 24 HOURS AFTER THE CLOSE OF THE AUCTION, I AM SELLING TRUCK LOCALLY SOR I RESERVE THE RIGHT TO END AUCTION AT ANY TIME. THANKS FOR LOOKING.