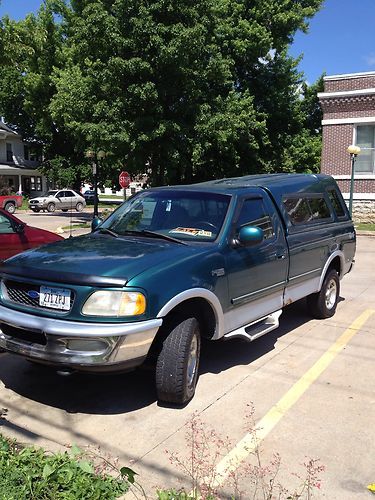 Condition: UsedA vehicle is considered used if it has been registered and issued a title. Used vehicles have had at least one previous owner. The condition of the exterior, interior and engine can vary depending on the vehicle's history. See the seller's listing for full details and description of any imperfections.Seller Notes:"Long bed with bed liner and topper. Running boards. In good overall shape. Few small rust spots as expected in a 1997. Cold A/C,Does have a hole in muffler, and headliner is loose in a few areas but not completely down. Power windows and locks with sliding rear glass. Bench seats with a fold down center seat for additional storage. Good Tires. Any questions call Shawn at 304-532-2109 before bidding."

Solid Ford F150.  I am second owner,  Only reason we are selling it, is we have outgrown it and hardly ever drive it anymore.  Gets 17-20 MPG depending on how you drive it.  Pretty good shape for a 1997 as rust spots are few, all power locks and windows work, cruise works and radio and cassette work.  Does have a hole in muffler that needs repaired.  Runs strong and has had oil replaced every 3,000 miles since it was driven off lot.  Family friend owned it before me, so I know it has been taken care of.  Also has a seal around back window that leaks during a heavy rains.  I drove this vehicle daily until last fall.