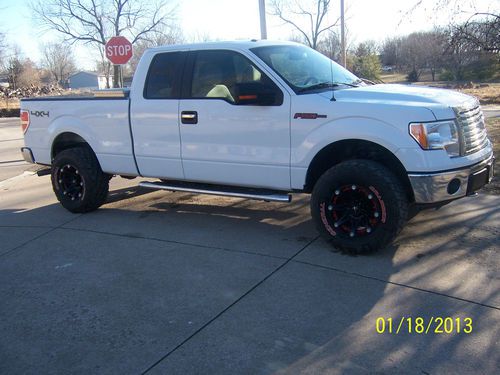 2010 FORD F-150 XLT EXTENDED CAB 4X4. AUTO 6-SPEED TRANS. MANY OPTIONS. THIS TRUCK IS A HEAD TURNER AND JUST FUN TO DRIVE AND BE SEEN IN. NEW WHEELS AND GENERAL GRABBER RED LETTER TIRES. HAS RED FORD & F150 EMBLEMS. THIS TRUCK WAS DROVE BY A GENTLEMAN I WORK WITH AND WAS METICULOUSLY MAINTAINED. IT HAS APPROX. 113,400 MILES ON IT AND DESPITE THE USUAL PAINT CHIPS AND NORMAL WEAR IS IN WONDERFUL CONDITION. I WILL TRY TO ANSWER ANY QUESTIONS ASAP. THANK YOU FOR LOOKING. THIS TRUCK ALSO HAS A THREE INCH LIFT ON IT. HAD SECOND SET OF PLUGS INSTALLED AT 102,000. HAS HAD ALL MAJOR SERVICES. PLEASE DON'T WAIT UNTIL RIGHT BEFORE THE AUCTION ENDS TO MAKE AN OFFER. I CAN'T CHECK MY AUCTIONS FROM WORK AND EBAY WON'T LET ME CONTACT YOU AFTER THE AUCTION IS OVER.