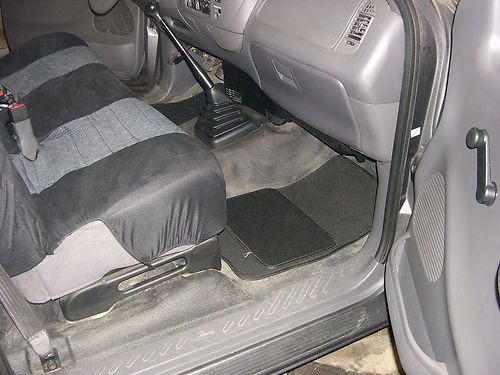 clear title one owner----55,128 miles manunal 5speed over drive---estate  truck----ready to go down the road-low miles very few dengs---a little rust on the bumper rear-small dent in front bumper-it has a hair line crack in the windshield a few inches up from the botton-side mirrows ,the original glass got broken-so after market glass added----they work fine just not original---new mirrow on ebay 24.00 each----truck drives  good every thing works----tires probably 80%-has trailer hitch-I drove it a few miles ,rides fine plenty of power-abs brakes-it had been sitting all winter ,it started right off-clutch works fine trans missino shift perfect----book on it is 4,900.00--high milage ones ( over 150000)are advertized for 3900,00 we are asking 4000---thats 900, less than book,-I just put on new seat covers,not to cover up anything that was torn-just soiled---rear end and tranny check out ok on oil levels---I will make sure every thing is serviced and ready to go ---it is inside out of the way so buy now and pick up later thats ok just let us know when---againg low actual miles----one owner--I have seem some advertized with over 200,000 on then----so this truck has yrs of life left in it------this is a good truck---don't hesitate to ask question---it is in altoona iowa,just east of des moines ,south of I -80--------and yes it has a spare tire