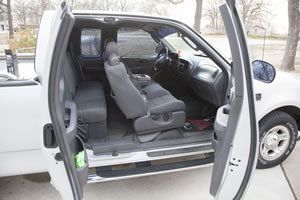 Condition: UsedA vehicle is considered used if it has been registered and issued a title. Used vehicles have had at least one previous owner. The condition of the exterior, interior and engine can vary depending on the vehicle's history. See the seller's listing for full details and description of any imperfections.Seller Notes:"General wear and tear on the vehicle, but very well taken care of. No major dents, never been in an accident. Small dings and scratches that you would expect on a truck this age."

This is a very clean and nice 2004 F-150 Heritage STX package. The STX package has a painted airdam, bed rails, step bars, and STX badging. I added a complete custom Pioneer stereo with all Pioneer speakers and a 10" subwoofer in a custom enclosure built for the 2004 F-150. The speakers and the Sub are amped. This truck also has a custom dual exhaust that is throaty, but not obnoxious. I've also added a K&N cold air intake (FIPK: Fuel Injection Performance Kit) and throttle body spacer. It's a fantastic truck and I've enjoyed it a lot over it's lifetime. I am the second owner of the truck.