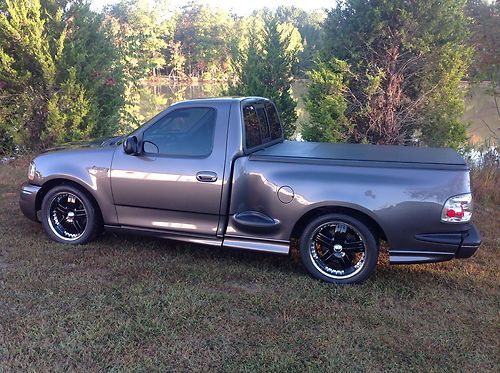 2003 Ford SVT Lightning. It is in fantastic condition. It has only had two owners and has 19,200 original miles. The truck has a factory Bed liner and tow package. It is completely stock with the exception of a Magnaflow cat back exhaust and an aftermarket CD player. I do not have the original exhaust or factory CD player. I do have a custom cover and the factory wheels and tires. Both the tires and wheels are in excellent condition and free of any defects. The truck has always been garage kept and even kept out of the midday sun to avoid the moldings fading. The interior is spotless and the carpets under the custom floor mat are in great condition. The truck still smells new and runs and drives the same. It gets an unbelievable amount of comments wherever I take it and it would be hard to find a nicer example. The exterior has never had any paint work whatsoever. There are no surprises with this truck. Please call or text with any questions. I am located in Farmville, VA. I will gladly help with getting the vehicle transported to you. 434-390-6223