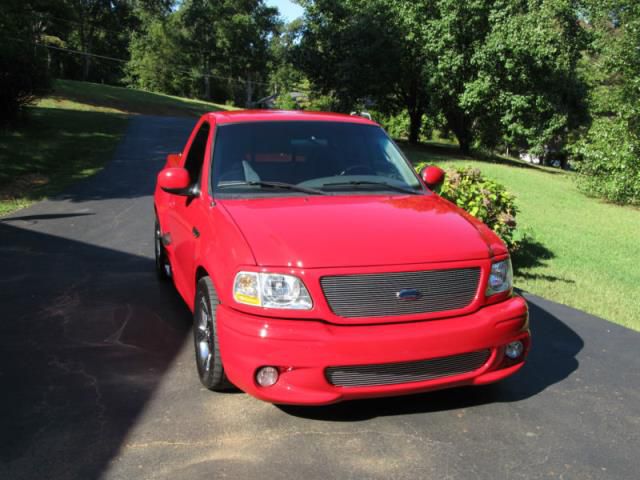 Ford F-150 SVT Lightning Truck Showroom New & Loaded Collectors Dream Truck This is a very nice non-smoking and garage kept 2001 Ford F 150 SVT Lightning Truck. The truck has a 5.4L supercharged engine that runs with Mobile 1 oil. The seats have the special SVT Leather insert in them and the SVT Chrome logo on the exterior. The pictures tell the true beauty of this truck. Everything in the pictures is included with the truck. The truck has been serviced throughout all systems at a Ford dealership. The truck comes with the Ford factory SVT owners manual and all manuals that were included with the SVT zippered. Both sets of keys and remotes are included. It also has a Ford SVT certificate and book as well as the original 2001 Chicago auto Show press release brochures and sales literature. You will also receive two die cast Red SVT models that match the truck. The bed is covered with a matching Bright Red cover and the truck bed has a liner that covers the interior surfaces of the bed. There has not been anything hauled in the truck or nothing has been towed with the truck. Listed below are some of the key features of this truck: 1) Red bed cover with telescoping struts 2) Bed liner and a Lightning & Ford mat 3) CD Player with a 6 - CD changer behind the passenger seat. 4) Power windows, power steering, air conditioning, sliding rear window. 5) Complete paperwork from the factory as well as several factory sales brochures, book, die-cast model, SVT certificate from Ford, and a black engraved plaque with the specifications of the truck laser engraved on it. 6) Airaid cold air induction system under the hood. 7) Highly detailed under the hood and nothing leaks. 8) Roush chrome wheels and tires. 9) Special stainless exterior SVT emblems. 10) Serial number 3,411 out of a total 6, 381 produced by Ford. This truck was built on april 04, 2001. 11) Custom chrome grill. 12) The list goes on and on. The pictures do a good job showing the truck.