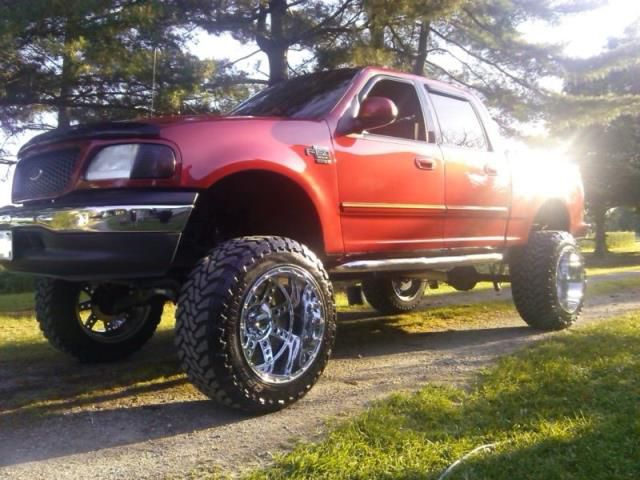 2001 f150 2wd supercrew cali style truck...it has only 157k miles that were very gently placed on the truck, I honestly can tell you I don't think its even been over 4k rpm's. ill start by telling you the bads, the cruise control plug under the hood went bad, and I have not replaced it yet, and there is one tiny nickel dent in the rear passenger door that you can not see unless you look really hard, now the goods, its a beautiful truck, and gets great gas mileage....its 110% rust free top to bottom, so you don't have to worry about that. the inside is all stock, just needs to maybe be shampooed(4 kids riding for a few years will make it that way)....the outside, the paint is all stock except the bed cover and tailgate...the tailgate I did as a French style to give it the custom look from the back and it does have license plate lights to make it legal...the bed cover I bought years ago from my dad and painted it to match, there are no cracks and anything wrong with it....I added the stainless nerf bars a few years ago and they hold a lot of weight and of course, are not rusted....the lift 13 1/2" lift is made of a 7.5" Fabtech full suspension, top gun customs 2" add a leaf and 3" coil daystar spacers and a performance accessories 3" body lift....the lift and all components were professionally installed and drives and rides wonderfully....the upper and lower ball joints are as light as you'd ever want them and don't need replaced any time soon.....the tires are 37x13.5x22 Toyo MT Open Country on 22x14 Diesels -76 offset, are 4 corners are in great shape and are not peeling, cracking or pitting... all power options work fine as does everything else on the truck....if you have any questions, please ask, im sure ive forgotten something or if you want more pix, just let me know....the only reason im selling is because of my double knee surgery, and im after a SUV with 3rd row seating...