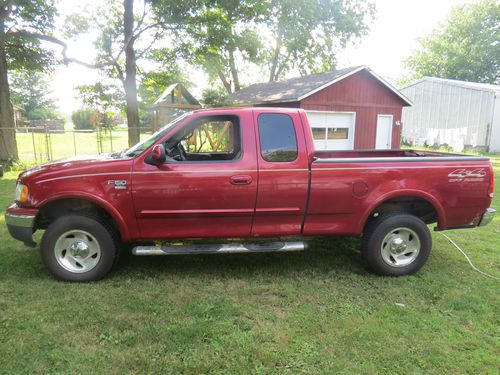 2000 Ford F150 with 191175 miles.  Has the 4.6 liter V8 with automatic transmission and shift on go 4X4.   The truck runs great and drives straight.  No check engine or trouble lights on.  Heat works good and AC blows real cold.  Has new tires that have just 6000 miles on them.  Truck does has a few things that don't work such as the power mirrors and the power door locks, the actuators are wore out.  The tranny shifts good and once in a while it vibrates when shifting into over drive.  Front suspension is tight but a little squeaky.  Never had any issue with the truck but wanted to give full disclosure.  Truck has it fair share of rust also, the rockers and cab corners are rusted and the bed has some holes in the rear and the tail gate hinges are gone.  I have replaced the drivers side exhaust manifold, wheel bearing and hub, new brakes, and spark plugs and a couple coil packs.  See attached pics.  Truck is for sale locally and auction can end at any time.  SOLD AS IS WERE IS, No warranty expressed or implied.