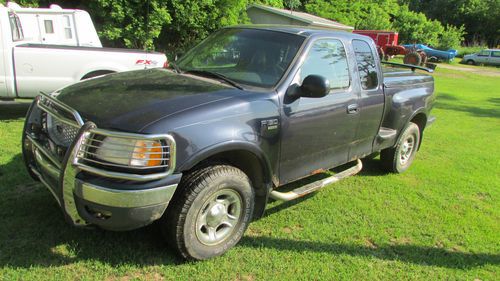 THIS IS A GREAT TRUCK WITH A LOT OF MILES LEFT, THE ONLY THING NEEDED IS SOME RUST REPAIR . MECHANICALLY IT IS SOUND NOTHING NEEDED EVERYTHING IS IN GOOD CONDITION ,TIRES ARE 75% TANNY IS SMOOTH LIKE IT SHOULD BE , MOTOR RUNS AS IT SHOULD ,NO LEAKS ,AIR COLD, NEW BRAKES LAST YEAR, TOWING PACKAGE WITH BRAKE CONTROL, RAILS IN BOX FOR 5TH WHEEL HITCH, BED LINER,THIS TRUCK HAS HAD GOOD MAINTENANCE CARE .THERE IS A DENT IN TAIL GATE AND FOG LIGHT NEED REPLACING IN FRONT.
I WOULD DRIVE THIS TRUCK ACROSS COUNTY WITHOUT WORRY.
PLEASE MAIL ME WITH QUESTIONS OR CALL 616 667 7727
INTERIOR IS VERY NICE NO RIPS OR TEARS

SORRY I TOOK PICTURE OF TRUCK WITHOUT WASHING IT FIRST, NOT TO SMART !!