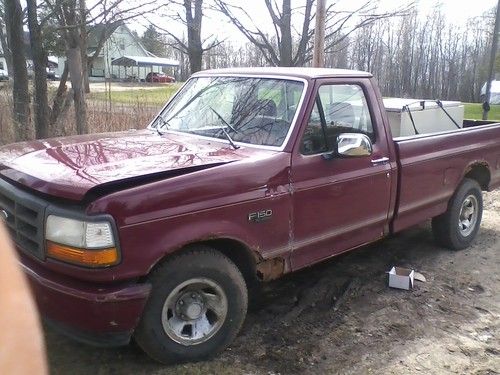 1993 Ford F150. Higher miles, but, a lot of new parts, Including, fresh tuneup(new plugs, wires, distributer cap and rotor), also new ignition coil, and, Duralast battery. New ft tires (Firestone winterforce). Like new rear tires (standerd all season). Body has rust around wheel wells and what not, typical of a northern Michigan truck. Does have a slight miss fire (not bad, just being honest). Put a new distributer assembly in it, and, I do not own a timing light, so, timing is slightly off. Runs and drives great tho. Hot heat. Sliding rear window. Has aftermarket Kenwood CD/MP3 player. Sat an HDD ready. Cost over $300 alone. If you have any other questions, or, would like any other pics, feel free to ask. Thanks for looking!!