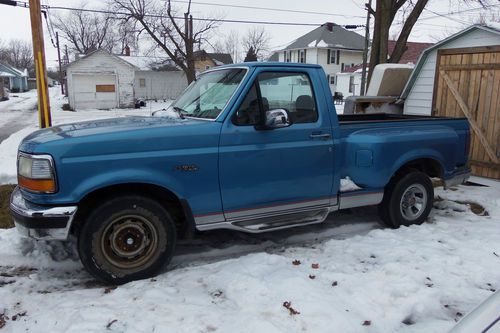 Condition: Used: A vehicle is considered used if it has been registered and issued a title. Used vehicles have had at least one previous owner. The condition of the exterior, interior and engine can vary depending on the vehicle's history. See the seller's listing for full details and description of any imperfections. ...
1992 Ford F-150 Custom Standard Cab Pickup 2-Door 5.0L LARIET XL
TRUCK RUNS GREAT
NEEDS REAR BUMPER AND HAS MINOR DAMAGE ON REAR FENDER..WHERE BUMPER GOES.....
EXHAUST IS NOT LOUD BUT WILL NEED SOME TLC IN NEAR FUTURE..
INSIDE IS CLEAN  SMALL RIP IN SEAT..
WILL MEET HALF WAY UP TO 100 MILES OTHERWISE TRANSPORT UPON SALE IS UP TO BUYER...
IM LOCATED IN FRANKFORT INDIANA AND ANY QUESTIONS PLEASE ASK..WELL WORTH IT..GOOD RUNNING TRUCK..