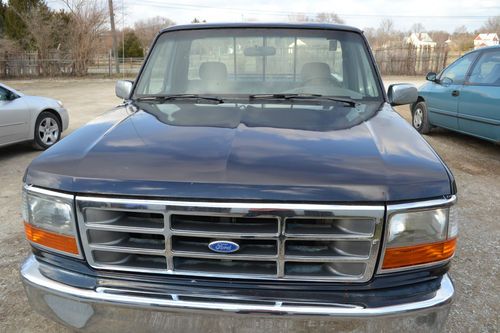 THIS TRUCK HAS 55,000 MILES ON REBUILT ENGINE AND TRANSMISSION...BOTH IN GOOD WORKING CONDITION.  THE TRUCK IS DRIVABLE, STARTS AND RUNS GREAT.  BUT POWER STEERING IS OUT AND NEEDS SOME STEERING MECHANISM WORK.  I STARTED RESTORING THE TRUCK YEARS AGO BUT NEVER FINISHED.  INSIDE AS YOU CAN SEE NEEDS SOME ATTENTION AS WELL.  NO INSIDE DOOR HANDLES BUT OUTSIDE ONES WORK FINE.  ROLL UP WINDOWS WORK GREAT...THEY ARE POWER WINDOWS..(YOUR POWER) HA HA.  THIS TRUCK WITH A LITTLE TLC WILL MAKE ANYONE A GREAT WORK TRUCK.  HAS SOME BODY RUST VIA PICS AND SOME ATTENTION ON THE TAIL GATE.  NEEDS NEW SHOCKS.  CALL 317-702-1545 AND ASK FOR JEFF.  ITS MY TRUCK AND I JUST PARKED IT ...BEEN DRIVING IT FOR MANY YEARS.  MY FATHER BOUGHT THIS TRUCK AND I AM SECOND OWNER   ***LOW RESERVE***  HAVE FUN BIDDING