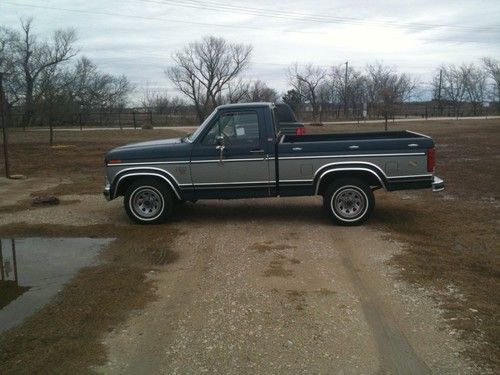 Condition: UsedA vehicle is considered used if it has been registered and issued a title. Used vehicles have had at least one previous owner. The condition of the exterior, interior and engine can vary depending on the vehicle's history. See the seller's listing for full details and description of any imperfections.Seller Notes:"This truck was traded to me from a Georgia couple that in herited it from their grand parents. truck shows 17k miles, it was inspected 19 years in a row by same ford dealer that sold it. But when I changed the title to my name about 5 years ago, state of Texas put as exempt because of its age. When you drive it you will know it is super low mileage. Lariat trim, sliding back glass, factory mags with factory paint still there,air, power, AM/FM/Cassette, fac tach, electric doors and windows-everything works. Tires old and cracked so I put 5 New Radials on truck. Original Paint two tone, that has a small amount of crows feet [very small] 302 V8 with overdrive automatic,factory fuel injected, cruises at 70 MPH at 1800 RPM, very economical. NO rattles or bangs very tight as you would expect."

Very nice Truck, Should give years of service or you can just drive a few miles onto it and should return your investment, will get better with age. Starts on one turn and goes down road like a new 86 truck.